As usual, I’m about half a century behind on blogging…my bad. Here we go again:

After wrapping up in Kenya, we spent just over two weeks in Tanzania, with 6 of those days (5 nights) spent on safari and the remainder spent appreciating the glorious heat, humidity, and clear waters of Zanzibar. (Fun fact: Did you know that Zanzibar is a semi-autonomous region of Tanzania? Because I didn’t until we planned this trip!)

This time we opted for a private tour, so it was just me and Ben plus our driver/guide for the full safari. It made this safari pricier than the one in Kenya, but it appears that safaris in Tanzania are always more expensive because of exorbitant park fees–buyer beware. Was it totally worth it though? YES. All of the parks were lovely, each having their own special aspects, but I’d be lying if I didn’t say that the Serengeti is in a world all its own. It’s the Tanzanian part of Masai Mara (or I suppose you could say that Masai Mara is the Kenyan part of Serengeti)–which we loved–and it was glorious. Ngorongoro is essentially part of Serengeti (all part of the same conserved land, though they are technically separate and have different fees, etc) so I’m going to cheat and say that it counts as part of the same ranking–stopping there is a MUST if you’re going to Serengeti. Tarangire was my second favorite because it’s an elephant lover’s paradise–I died. Lake Manyara was lovely but it was definitely the least exciting of the parks and could be missed if you need a shorter trip.

We saw so many incredible things on this safari that words won’t do…here are some of our favorite pictures and moments:

After wrapping up our safari, we headed to Zanzibar. We planned for a couple of days in Stone Town (a part of Zanzibar City) and then for a few days by the beach for some lazy time. Our Stone Town Airbnb was a bit of a failure (most buildings in Stone Town are made from coral stone and thus have a lot of issues with water damage that makes them look dilapidated and take on a not-so-lovely smell) but it was tolerable enough to stay for two nights to avoid losing any money. Since we arrived late on our first night and were heading out to the beach two days later, we really only had one day to explore the city–enough time if you ask me though.

We opted for a walking tour with a guide, organized through our Airbnb host, and it was a perfect choice for the day. He gave us a little Zanzibari history lesson, showed us the town’s famous architecture, took us to Darajani Market (where I had to smell some of the stinkiest fish smells of my life, lord help me), and then took us to the Slavery Memorial and Museum. I never knew this, but Stone Town was home to one of the world’s last slave markets (it shut down in the 1870s), with slaves shipped there from all over mainland Africa for sale to the highest bidder–though bidding was often based on who took a beating without breaking down. The stories and details told in the museum are gruesome, made more horrifying when you realize they’re not stories at all but actual history. Definitely a sobering place and worth a visit if you’re in Zanzibar.

The next day, we headed to our beach hotel for the next several nights. The best beaches in Zanzibar are located on the north/northeast side of the island–but those are also the beaches with the most expensive hotels. As such, since money sadly doesn’t grow on trees, we opted for a much quieter and ‘less ideal’ hotel on the southeastern side of the island. It’s still Zanzibar so really, it ain’t too bad. We didn’t do much while we were there, just sleep, eat, drink, read, tan, and repeat. It was lovely. We did decide to do one small excursion during our time there though–dolphins! There’s a spot not far from where our hotel was where dolphin pods can typically be seen year round, particularly in the mornings. The excursion is far less organized and froofy than ones you’ll find in other countries, but that’s to be expected in a less developed locale–as long as you know to expect a slightly sketchy boat and very little in the way of tourist-y comfort, you’ll be fine. It’ll totally be worth it once you get out there and all of a sudden you’re 2 feet from these absolutely gorgeous creatures. Better yet, jump in the water so you can see them up close and (pretend) to swim with them–because really, they’re too fast for you to keep up 😂 Such an amazing experience. 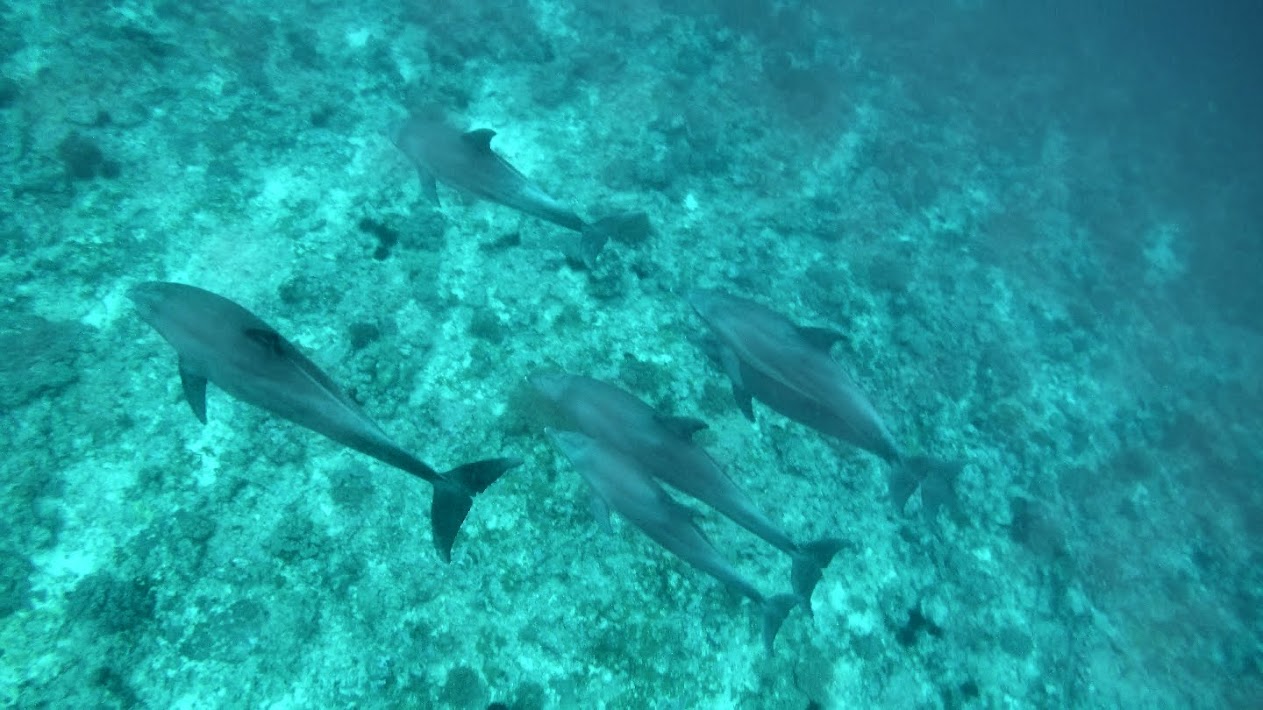 On our last day, our taxi driver dropped us off at the ferry so we could take it across to Dar Es Salaam, as our flight to Namibia would be leaving from there bright and early the next morning. The ferry itself was fine but the de-boarding (?) process in Dar was a total nightmare. It’s complete chaos and you’ve got eager cab drivers nagging you the very SECOND you’re looking for your luggage (not even off the boat yet). You can only say ‘no thanks’ so many times before you lose your shit…like I did when we exited the ferry terminal and I saw the MOB of cab drivers all about to shout “TAXI?! TAXI?! TAXI?!”. I may or may not have freaked out and yelled “I DON’T NEED A TAXI SO NO ONE BETTER ASK ME” (I honestly can’t remember if there was an expletive in there or not) to which I was greeted with a short silence and then a stereotypical “pole pole” from a few of the men. What does pole pole mean? Slowly slowly. In other words, Swahili’s version of “calm down lady”. I don’t know who taught these men that they should tell a woman to calm down when she is clearly very angry, but they soon learned that it wasn’t going to work on the crazy American when I then yelled (even more loudly) “DON’T TELL ME TO FUCKING POLE POLE RIGHT NOW” with a look of murderous rage on my face. #smashthepatriarchy We were left alone after that. 🤷🏽‍♀️

We arrived too late in Dar to do anything of substance so I have little to say about the city, expect that we did find a Pizza Hut for dinner (I was homesick, sue me) and it was actually QUITE delish given that the pepperoni was made from beef (Tanzania is about a third Muslim and thus you’ll have trouble finding pork in many places). I felt like I was home for a hot minute. The next day we headed off to Namibia, with two layovers on the way to save some significant cash money. (In case you didn’t know, flights within Africa can be QUITE pricey and they often don’t have direct routes, even between major cities, so be prepared for some odd layovers to avoid paying insane prices.) It was a long ass day but we did make it.

More on our adventures in Namibia next time!