The final leg of our adventures through Africa is here!

If you read the last post, you’ll know that I left off right after the border crossing into Botswana, where I was greeted immediately by the glorious sight of elephants crossing the highway (because you know, that’s totally normal). As we drove closer, we obviously made a pit stop so I could stare and make baby talk noises like a bumbling buffoon. 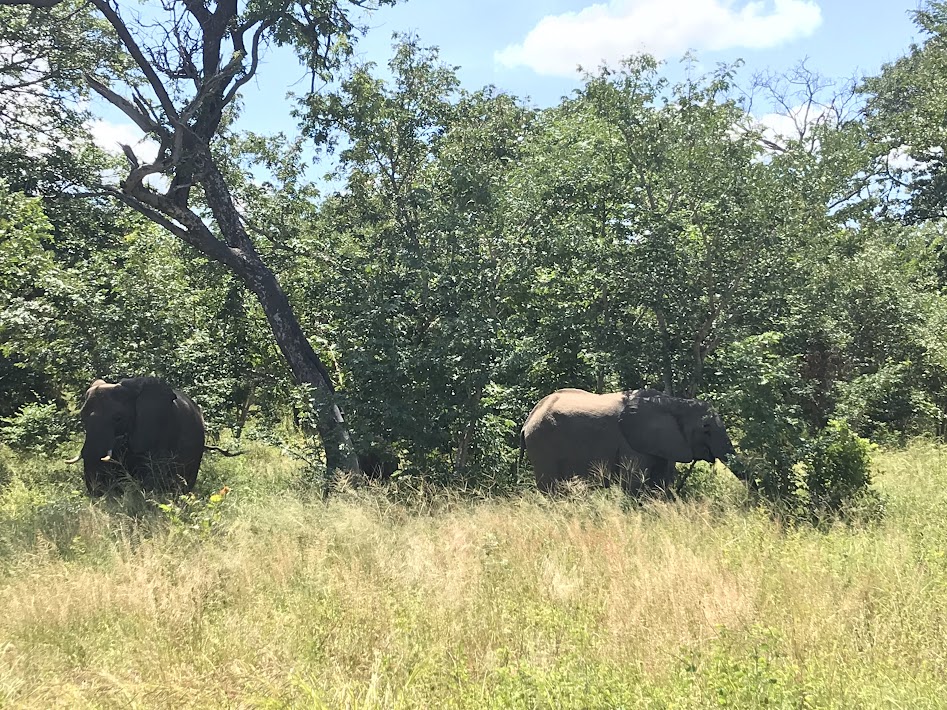 We did eventually get back on the road to head into Kasane. After a leisurely lunch at Water Lily Lodge, we took a sunset boat cruise along the Chobe River. The weather was lovely and there were so many animals to see!

It all ended with a cloudy but still lovely sunset: 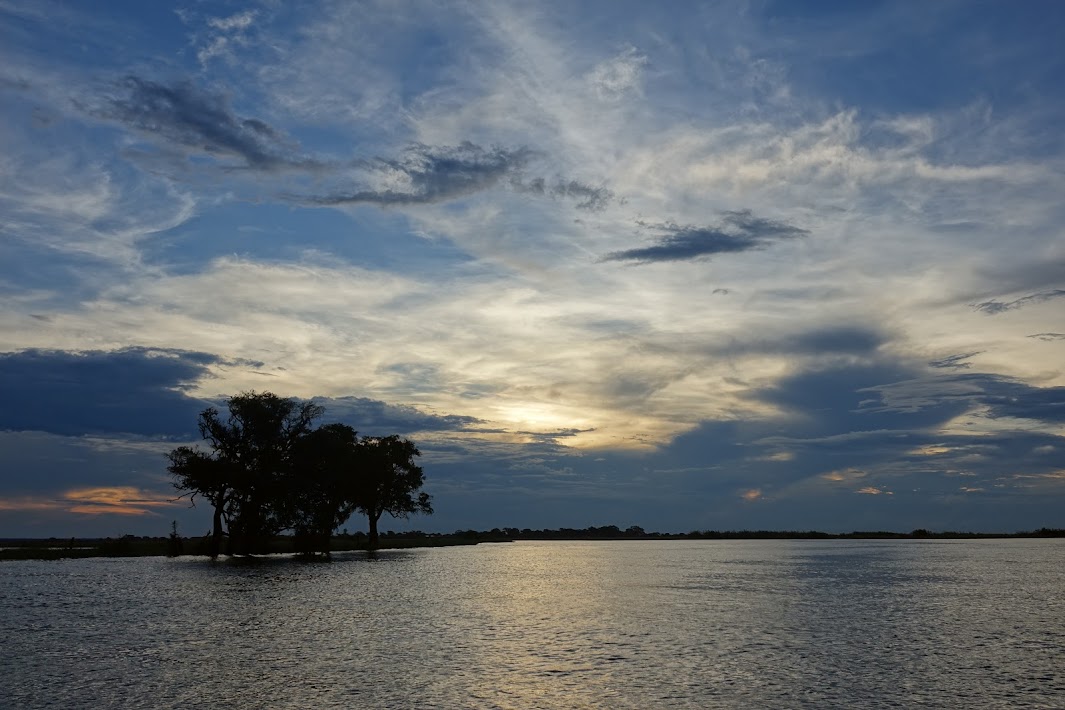 When we got back, we followed our guide back in our car to the hotel where we’d be staying for the next two nights: Chobe Bush Camp. I couldn’t find them on TripAdvisor when we were planning, which worried me, but our tour operator assured me it would be a great stay and he was right. The chalets are nice enough, but the reason you stay here is for the watering hole they’ve got on the property–and the animals it attracts. It was an all-night elephant fest and I was dying of pure joy! The pictures kind of suck because it was pitch black out except for a spotlight on the watering hole, and flashes would just scare the animals, but trust me–it’s FANTASTIC. Since it was low season, we were the only guests at the hotel for the two nights and got to be BFFs with the owner (a lovely and hilarious man from Uruguay) and staff. The first night, the chef made us quite the epic feast: 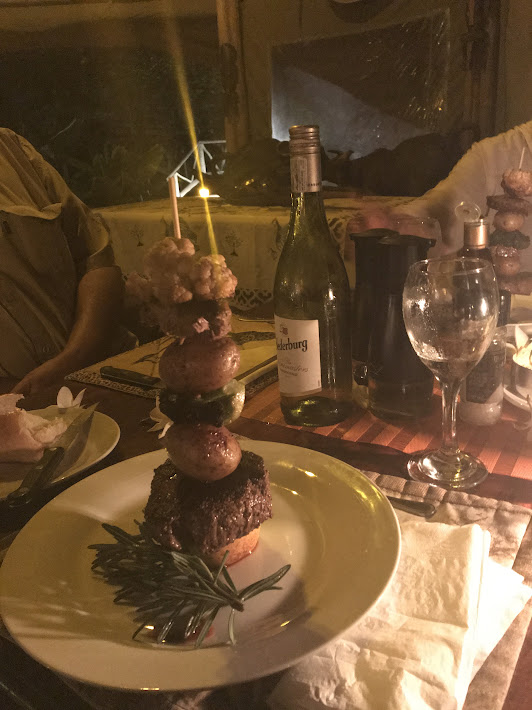 When we went to bed that night, Ben was admiring a little frog figurine on the mirror…and then he saw its throat move, so maybe it wasn’t a figurine! 😂

This day was dedicated to a full-day exploration of Chobe National Park, with a lunch break at Water Lily Lodge again. So many animals to see!

When we got back to the hotel that night, right as I was going to get in the shower, Ben went outside and noticed some friends at the watering hole!

And then, after dinner, we went to look again and even MORE had shown up! Basically, this hotel is my heaven.

After an early breakfast, it was time to head for Camp Savuti, our next hotel in the Savuti area of Chobe (deeper into the park). The drive out there from Kasane is a LONG one…despite only being ~160km, it takes 4-5 hours because of the roads. A solid majority of it is deep sand, so there’s no making that trek without a good 4×4 vehicle, which we had, and even then it’s not easy. Plus, given that it was rainy season, we started to run into more and more death puddles (long, wide, murky and muddy puddles of completely unknown depth) along the way. It was not a pleasant drive–you’ve been warned.

We did eventually make it and the camp (glamp) was quite nice, would fully recommend. There was one other couple staying there at the time (unfortunately, they had to pose as ‘friends’ as it was a same sex couple and same sex relationships are still illegal in Botswana 😢), and we all went on the afternoon guided safari together (Ben and I didn’t trust our VERY dirty car (see below) to survive any more puddles than necessary).

Day 254: Too close to drowning for comfort.

Next up: Khwai Guesthouse, in Moremi Game Reserve. As expected, this involves driving deeper into the Okavango Delta–i.e. more (and deeper) puddles. Honestly, at this point, they’re mini-lakes. The drive from Camp Savuti to Khwai Guesthouse is 100km and it took us like 3 hours. This road was far more treacherous than the day before and we had a few close calls and then one close call that was WAY too close to drowning the car for comfort. The maps we bought at the park gates were less than ideal in the amount of detail provided, and we somehow ended up taking the river crossing…which means crossing a river WITH YOUR CAR. To be fair, we didn’t go in totally blind–we did see a line of cars (with snorkels of course) come the other direction and they survived, so we decided to try it. Perhaps ignorance is bliss? Though maybe it wasn’t ignorance as much as stupidity. The car engine gurgled at one point and I was nearly certain we were goners but Ben gunned it and we made it out. Don’t ask me how. God bless Ben.

We can’t find the GoPro video footage of the river crossing, but here’s a still from a random puddle encounter…do you see why we were freaking out?

We opted for an early morning game drive with the guide from Khwai rather than trying it ourselves, given the previous day’s river crossing adventure. It’s a good thing we did:

It was a solid game drive, despite not having too many animal sightings–but this lion most definitely made up for it:

We switched to the Sango Safari Camp that afternoon, mostly because our tour operator said there weren’t two nights available at Khwai Guesthouse–though that ended up being untrue…but it turned out for the best because Sango was GREAT. Can’t recommend this place enough! Really nice rooms, lovely staff, yummy food. After a delicious lunch there (I ate chickpeas and LIKED them…it’s a miracle!), we relaxed for the early afternoon and then went on a guided afternoon safari drive with Sango (again…why risk puddles?). Once again, a successful drive with cute animals to be seen:

And it wouldn’t be a safari drive in the Okavango if there wasn’t a little mud drama:

After an early breakfast, we got on the road to head to Maun for our next stop (Quennes InnQuennes Inn)–this place was fine, though nothing to write home about (I also saw the scariest spider I’ve seen in a LONG time there so maybe I wouldn’t go back 😂). Aside from the river crossing on the way to Khwai, we probably hit the worst muddy puddles on this stretch of the trip. Some were deep, but the bigger issue was the muddiness…which means you risk getting stuck and not having a great way to get out unless someone drives by (which is a total crapshoot). Ben yelled a few key expletives during a couple of rough spots, and we cursed our tour operator’s name repeatedly, but we did make it. Thankfully.

The hotel was another self-catering one but we had no desire to eat more non-perishables OR cook, so we went out to a local fast-food type place for a quick bite that evening and then passed out pretty early that night. Not much to do in Maun…

Day 257: My new mission in life: bringing down Tautona Lodge

Our next stop was Ghanzi (Tautona Lodge), and it was a 300km drive, so poor Ben had a long drive ahead–though this time it was on paved roads, so really, we can’t complain. Our initial room at the hotel was a total POS, so I asked for a switch to something better and room #2 was at least a vague improvement–though not by much. This hotel wasn’t disgusting or anything, but it really was the worst one we stayed at on this leg of the trip…which was further proven by what we discovered later.

After checking in and grabbing some lunch, we took a drive around the hotel’s surrounding private property, as it’s got plenty of wildlife to see. The vegetation was really thick so we didn’t see a ton but there are a couple of cute photos worth noting:

Towards the end of our drive, we suddenly came upon big and tall chain link pens holding several male and female lions. At first I thought it was some kind of zoo–which is sad enough to see in Africa, their natural habitat–but it just seemed too odd to be that. I didn’t take any pictures because I was too creeped out by the whole thing (there are some on TripAdvisor if you want to see what I meant), and we drove back to the hotel for a little investigating. When I asked at the front desk about it, the girl working behind the counter couldn’t really answer a single question for me about the lions, and the vague answers she did give me sounded like lies at best. I don’t blame the girl, she’s just an employee, but then I couldn’t let it go. Hours of (very slow internet) research later, I discovered that the Tautona Lodge property is owned by some schmuck named Christian de Graf, an Afrikaner from Botswana, who was Botswana’s Minister of Agriculture and a member of Parliament until about 2015 or so. In late 2013, it was discovered that he was breeding lions on his property and then selling them en masse to a “Game Lodge” in South Africa that allows hunting. It’s unclear to me if the lions that are still on the Tautona Lodge property are being actively bred and if this guy is continuing his disgusting business, but regardless, seeing them in cages like that was horrible. I was in a total rage after that.

As we left the hotel the following morning, I asked the staff about who owns the property and they confirmed that while the hotel is currently run by someone else, the property still belongs to de Graf. I felt icky for having stayed there and have since made it my mission to figure out how to close that place down. If you have ideas, feel free to suggest.

And so our last day was here: this time it was a ~550km drive back to Windhoek…poor Ben. It was a highly boring and uneventful drive, except for the part where we crossed the border at Mamuno and they almost didn’t give Ben his exit stamp for Botswana because they couldn’t find his entry stamp. Lesson learned? After going through immigration, ALWAYS check for your stamp before leaving the premises…just in case!

We had to stop for another car wash before returning the vehicle because, well, it was a damn disaster.

The car return went smoothly and the rental place dropped us off at our hotel for the night: Villa Moringa Guesthouse. Without a car to get us anywhere, we sat around, ordered some delivery, and watched TV–perfect excuse to be bums on our last night.

We left Namibia the next day, first stop Luxembourg to visit Ben’s family and meet our new niece. After a week there, we headed to the US for 3 weeks, with stops in New York, Atlanta, Baltimore, and Boston. We celebrated a wedding and met just a few of the babies born while we were away–so many precious nuggets! It was lovely to be home and see everyone, enjoy some semblance of normalcy for a few weeks, even if we were on the road for most of it. Plus I ate a LOT of Chick-fil-A. It was glorious.

But the trip isn’t over just yet! Next up: South America. First stop: Peru. More next time!