We’re finally here – the last stop of the trip! Only 8 months late, no biggie. 🤦🏽‍♀️ Fortunately for you (and me), this post will be short and sweet since the vast majority of my time was spent tanning and reading (and sleeping and eating).

Day 325: Another leg finished, another flight to take

Our flights in and around South America were all booked as one big multi-city ticket [Lima to Mendoza to Buenos Aires to Costa Rica] to help save on fees (poor Ben spent way too much time looking at various iterations of flight paths and this was the best we could come up with), and so our flight to Costa Rica from Buenos Aires (with a short layover in Lima) was the last leg of that itinerary. We also somehow managed to get ourselves upgraded for at least one of the legs, not that I remember how I did it (I’m sure we paid a fee but who knows how much) or what it was like, since the only reason I ‘remembered’ was because of this photo:

Whatever the flight situation, we made it to San José sometime in the afternoon and headed to EuropCar to pick up our rental for the trip. That turned out to be an epic fail because they tried to charge us an extra several hundred dollars for ‘mandatory insurance’, but rest assured, Ben had prepared for this eventuality and had previously secured a second reservation at the Sixt down the road. The Uber to get to said Sixt took way too long because the roads in San José are one giant maze and we went in circles for a while but we eventually made it. After finally getting a car, then WE got lost in the same set of circular roads and somehow ended up at a toll booth with no cash and me digging around in the trunk for Ben’s wallet when it was in the front console all along (yes, we were THOSE people blocking an entire toll lane for like 5 minutes). ANYWAY, we needed to get back to the airport to pick up Ben’s cousin Evelyne who was arriving a few hours after us (all the way from Luxembourg!), and we did indeed make it.

Once we – and all of our luggage (yay!) – were in the car, it was time for the ~2 hour drive from San José to Jaco. It was basically pitch black out, so we didn’t see much, but we did make it one piece and that’s all you can really ask for. Rather than suffer through another potential Airbnb mishap, we decided to try a HomeAway rental for this final leg of the trip (the concept is the same but we were hoping the reviews would be more consistent and in-line with what to expect). It was a 2-bedroom/2-bath condo that was just a ~5 minute walk from the beach and it was perfect for what we needed. [Let’s be honest, all I needed was sunshine and a pool.]

As planned, we kept things pretty tame for the 3 weeks we were in Costa Rica. Evelyne was with us for the first week, then she headed home and Ben’s parents arrived the following day to join us for the second week; we spent the last few days on our own. It was a very low key time and it was exactly what we wanted – an opportunity to truly unwind from our typically-hectic tourist schedule. Plus, we needed to start looking for jobs in earnest (and if we’re truly being earnest, Ben did more of this than me 😂). It was lovely. We got plenty of sun and cooled off in the pool, I read plenty of books, and we caught up on some Netflix. 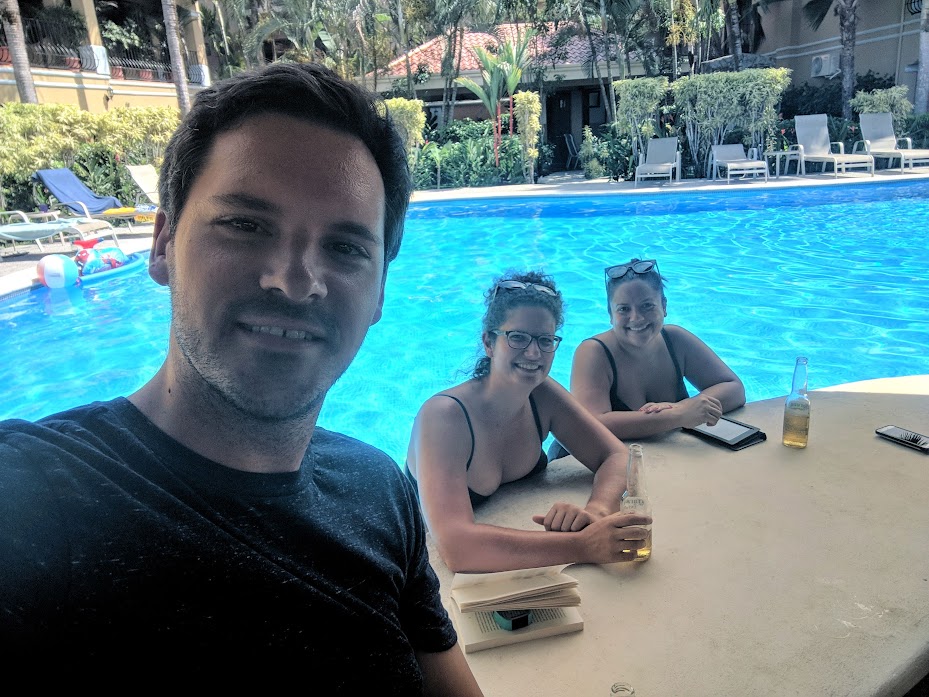 It was also a nice opportunity to scale back our spending by eating in more often since we had a condo with a proper kitchen. Jaco has a few big grocery stores with most everything you could need, so that was really helpful. One thing of note? I discovered that they have American (imported) Nacho Cheese Doritos in Costa Rica. This is an important piece of information to consider in our retirement destination decision-making.

Now, this would be a very boring blog post if that’s all we did, so don’t worry, we did do SOME cool stuff. For me, ‘some’ really means that I went to one national park two times, mostly because it had a nice beach, but to be fair Ben only went to one additional national parks, so he’s basically just as lazy. All that said, Manuel Antonio National Park is definitely worth a visit if you’re within reasonable driving distance. While you’re there, you can see some amazing animals AND you can enjoy the lovely beaches.

1. Parking’s an annoying task because you’ve got people hounding you to park in their lot in the process, but just be patient and try to park as close to the entrance as possible since you’ll be doing plenty of walking in the park (and those are the more legit parking lots anyway).

2. Bring food for lunch/snacks since they don’t sell anything in the park BUT make sure you follow the park’s rules on what to bring (water, sandwiches, and fruit) – they will check your bags on the way in and make you throw out anything that doesn’t meet the criteria. I repeat, don’t bring anything processed or packaged, as there are naughty little monkeys just waiting to steal stuff from you and anything with a wrapper might as well be glitter. Plus, you know, don’t litter.

3. If you really want to make sure you spot some animals, I recommend paying for the guide. I think it was $20-30USD per person. You’ll have the opportunity to learn some information about the area and animals plus get to look through their scopes for a nice, close look at any distant animals/bugs. Depending on your luck, this might be the only way to truly spot a sloth if he/she is hiding deep in the canopy.

4. Once you’re done with the park part, you can head to the beach! The water is gorgeous and warm enough for a nice swim BUT the waves can be pretty huge so be careful.

5. Make sure you set your things up pretty far up the beach because the occasional fast wave will sweep away everything in a jiffy! And leave someone with your stuff (assuming you went with other people) or the monkeys will steal it 😂

And with that you’ve seen the only ‘productive’ tourist-y thing I did for the entire 3 weeks. We went to the movies at some point in San José when driving to/from the airport, but otherwise, it was a gloriously lazy 3 weeks. Here are some nice scenic shots to distract from my uselessness: 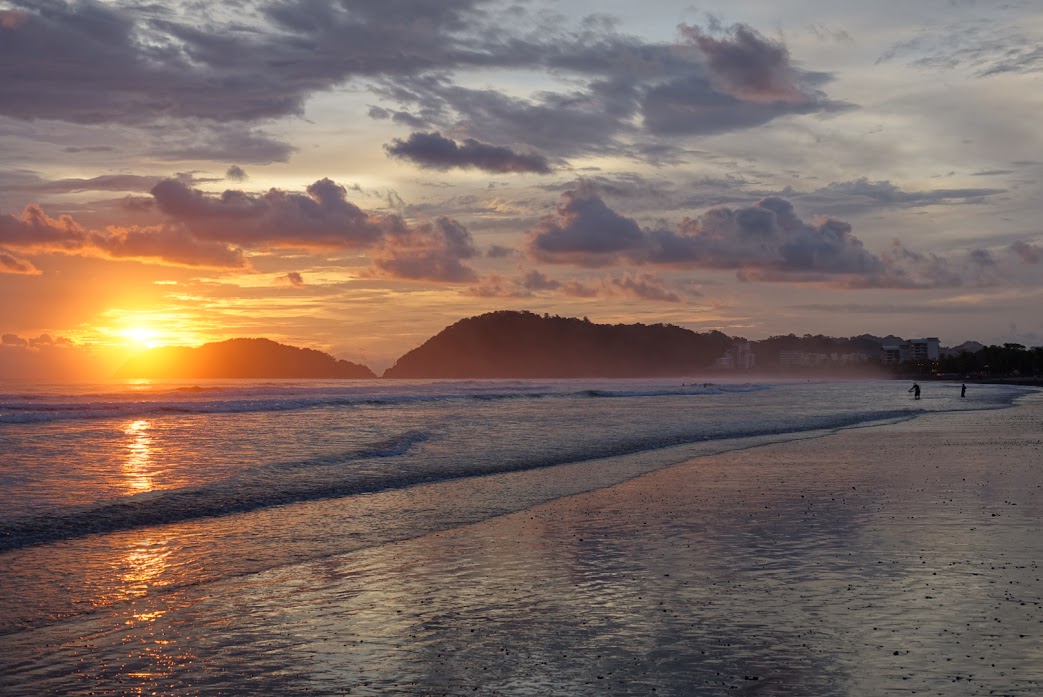 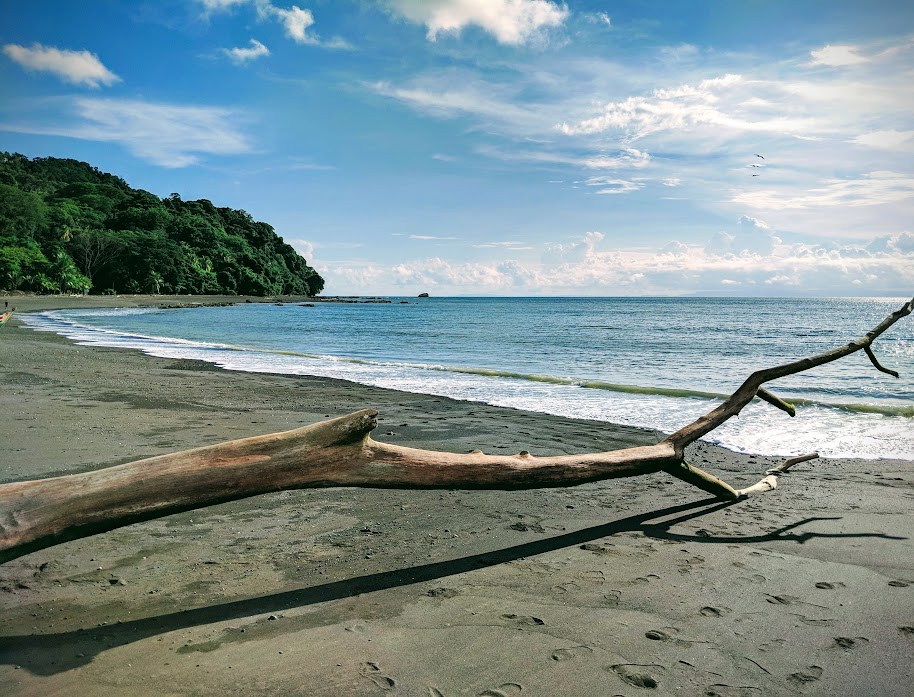 And so ends a year (almost) around the world! Eight months later and I still can’t believe it’s over.

We’ve got a couple more lingering posts to make about our travel stats plus some travel advice, but this public, rambling diary is officially over. You’re free! Thanks for reading my chaotic thoughts. My one real piece of advice: Life is short, take more vacations.